My junior high students have always struggled with multiplying fractions when I teach how to adjust recipes. I didn’t realize 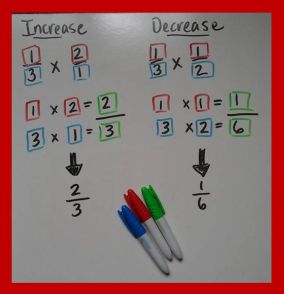 how much until I implemented a pre/post-test as my student learning outcome (SLO) project for my teacher evaluation. Students weren’t grasping this concept and it was consistently showing up as a weak area. I realized I needed to add more practice to what I was teaching my students in class so I decided to make it a little more interactive. This lesson is very adaptable to the ISN if you are using them in your classroom.

NOTE: Inform students that we will have a special guest with us today in class and introduce that guest as Math, specifically multiplying fractions! Students always ask why they have to know math and when are they ever going to use it in real life. This lesson is a perfect example of how they might do that.

← P.I.E.S: The Areas of Development
The True Cost of a Habit →