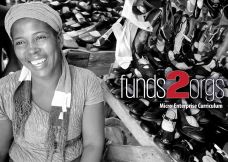 business? Wayne Elsey, Founder & CEO, of Funds2Orgs is sharing a full curriculum that has been aligned with Common Core for elementary, middle school, high school, and home school levels. The curriculum is an innovative approach that can be taught alone or be combined with a shoe drive fundraiser to understand the totality of the role of shoes in commerce and the environment.

Wayne is a social entrepreneur who first got involved in social good after the Indian Ocean tsunami. At the time he was the president of a shoe manufacturing company. He led the effort to ship hundreds of thousands of shoes to people affected by the tsunami who had lost everything. He then did the same thing when Katrina and the earthquake in Haiti occurred. Through a nonprofit he founded, he shipped over 17 million pairs of shoes overseas.

During those years, he learned a lot about the need of families in developing countries. He firmly believes in providing people with a hand-up. And, as a dad who had to sell candy, etc, he developed Funds2Orgs, which is a for-profit social enterprise that accomplishes three goals: