This June, I had the opportunity to take a  Foreign Foods class taught by 2008 Chef of the Year, Chef Tom Siegel, CEC.  It was a 5 day intensive, beginning at 8 a.m. and ending between 3 and 4 in the afternoon.  Each day focused on a different country or region.  Monday was Greece, Tuesday was Italy, Wednesday was “The Magreb”: Morocco and Tunisia, Thursday was Southeast Asia: Thailand and Vietnam, and Friday was BBQ through the American South.

The class consisted of approximately 15 students, most of which were FCS teachers. Class began with a lecture from Chef Siegel about the culture and customs of the country; this normally lasted till 10 a.m.  He would then give the class an overview about the meal we would be creating.  On the first day, we were split up into 4 cooking groups.  Each group was given a name having to do with each country we would be exploring.  We were the Greek team “Oompas!”  Each group was assigned a sous chef, who assisted with the recipes we were given and assembled our “mise en place” meaning needed ingredients. Monday, after the lecture, we made our way into the industrial kitchen, where Chef Siegel gave us a tour, pointing out the different areas of the kitchen: baking, soups and sauces, meats, salads, and short order meals, which was the main grill. After our quick overview of the kitchen, each person was given a recipe, and immediately started.  There was a chaotic, but exciting period of rushing around, looking for ingredients and equipment needed for our different dishes. Intermittently, Chef Siegel, along with the other chefs in the kitchen would give demonstrations.  Different demonstrations we observed were pasta making, crustacean cleaning, fish filleting, poultry cutting and butcher tying.  At 12:30, each person placed their dish on the serving table, complete with garnishes, beautiful serving dishes and utensils.

After we all enjoyed the amazing and unique meal, we would take turns discussing the dish each of us created and the class would give feedback.  We would then go back in the kitchen, and finish cleaning.  We were encouraged to clean not only our area, but take part in any cleanup in the kitchen that needed to be done.  After the cleanup, we headed back into the dining/lecture room and learned about different cooking methods and food presentation techniques practiced in commercial kitchens and restaurants.

Throughout the week, I prepared Greek fried chicken, poached fillets with white sauce, Tunisian briks, a meat, vegetable and egg mixture deep fried in a wonton wrapper, grilled shrimp puffs on sugar cane sticks and barbecued baked beans.  I really enjoyed cooking with new, unique ingredients using cooking methods I was familiar with.  Some of the recipes called for interesting cookware that are not used in the US.  One of the pieces of cookware was a tagine, a Moroccan slow cooker used to make stews and other dishes.  My favorite day was Friday, BBQ day.  Sauces were made with ingredients that are favored by each state in the south. 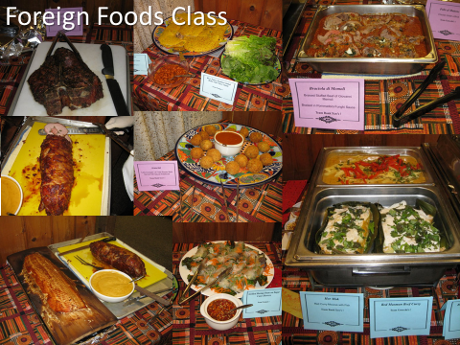 This class was so valuable for me in many ways.  I not only got to learn about the cultures and foods from other countries, but I also got to cook in an industrial kitchen while interacting with many teachers from around the state. I acquired teaching ideas from them on other topics other than international cuisine.  This class is by far the best, and most beneficial class I have taken since I started teaching.  This is why students learn the most when they are having fun!

For more information on this course and other courses offered by the University of Montana Missoula click here.