Thursday this week a new Food Guide Pyramid comes out except this time it’s a Food Guide dinner plate. The iconic pyramid was released in 1992 and was subsequently modified in 2005. Apparently the primary reason for ditching the pyramid is because it is a confusing symbol that is not changing Americans’ behaviors. The dinner plate pie graph is supposedly easier to understand and judge what’s only your plate against the pictorial national standard. Mexico has a similar plate design food guide pictured below. 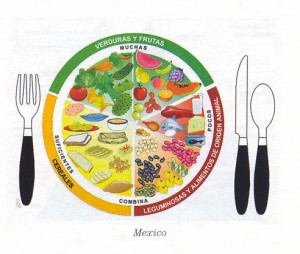 However, according the rumors the American food guide plate will have a glass of milk and most likely be portioned differently. The new food guide will also promote new nutritional messages such as to consume low fat or fat free dairy products, water instead of sugary drinks, lower sodium foods, and smaller portions overall. Nothing has been said about the exercise part of the food guide that was added in 2005 with the figure running up the side of the pyramid. I am curious to see how exercises will be incorporated into a plate design. Here’s a quick representation of my prediction: 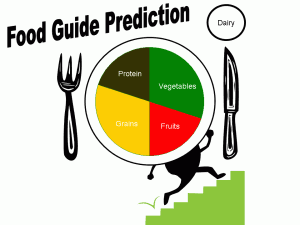 We’ll have more to come regarding the new pyramid as soon as its released so you can keep your students up to date with the new national nutritional guideline.