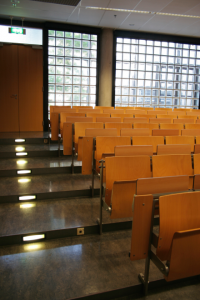 One day I was asking my students a question while they were taking notes, I kept asking the question over and over because no one was responding which was unusual for a pretty talkative class. Finally after they all stopped writing I noticed that they would then be able to answer my questions. I cut to the chase that day and asked every class how many of them could listen and take notes at the same time. Most of them said they couldn’t. I was in disbelief. I thought that I had done them a favor by giving them just fill in the blank notes but apparently they still were not absorbing what I was saying beyond the notes. We all learn better through story associations. This means that if we hear a story or example it helps us remember a concept or term. They were totally missing out on all my explanations, examples, and stories because they could not take notes and listen at the same time.

Ex. PowerPoint presentation and lecture of elements and principles of design for an interior design class.

Tips on how to use PowerPoint Effectively