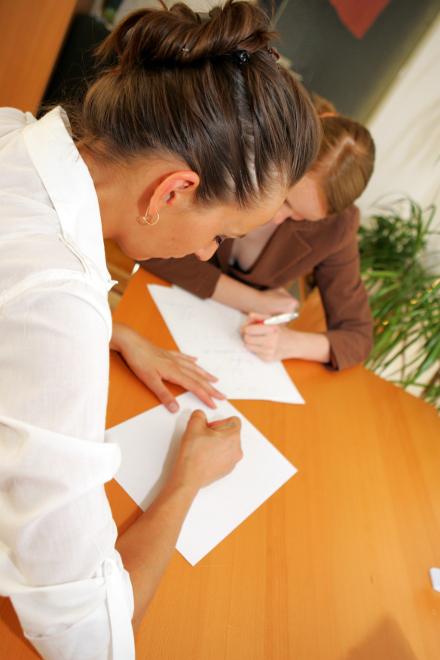 1. All “free riders” in the same group
Put all the same type of students in the same group–the clowns with the clowns, the bright ones with the bright ones and the average with the average. Depending on your class, I feel like this is a good way to go because it forces the group to figure it out and not just rely on the smart, motivated group member to do all the work. I almost exclusively use this technique when putting together lab groups. It is kind of amusing to see the clowns try to focus to follow a recipe. They usually realize really fast that they have to pull it together to make a recipe or look bad in front of their peers.

3. “Teachers” with challenged students
I have had instances where students are challenged but not necessarily unmotivated or unwilling to contribute. I pair these students with teacher type students who are compassionate, willing to help, and patient. I usually pull these students aside before hand and explain that they are to help these students learn and allow them to try to figure things out and not just do everything for them. For example, I had a student who was visually impaired and I paired him with “teachers.” He would measure incorrectly sometimes but [instead of just taking that task away from him, I had the teacher students help him recognize when he over measured. He was enabled to keep practicing the skill instead of just giving up because seeing the lines on the measuring cup was challenging.

4. Let students pick teams
Allowing students to pick groups can work similar to “putting all the free riders in the same group.” Usually students are friends with
similar type people, however this is not always the case. I have seen over and over again that when the “popular” kids choose to work
together the girls will do the work and the guys will get a free ride. The major disadvantage to this grouping method is that inevitably somebody is left out and doesn’t have friends in the class. Remembering my grade school experience prevents me from ever subjecting students to this grouping method.

Place all the student’s names in a hat and draw groups randomly. This takes the pressure off anyone being left out feeling however it does not allow you to prevent potential conflicts by separating students. Another benefit to random draw is that students know that it was random and they have less tendencies to blame or try to persuade your grouping decision.

Giving group grades is inevitably unfair. Several years ago, there was a change in educational philosophy that emphasized group learning. The shift was a result of the way most US companies were run-requiring more and more employees to work in teams. There was a push to emulate the corporate in the classroom and give kids an edge for their futures. However, teams can be a pain for numerous reasons, one being how work is done and to whom the credit is given for completed and incomplete work. Hence grading becomes difficult because most likely not every team member contributed equally. There are several ways to work with this challenge:

1. One Team or Project Grade

3. Put a Dollar on their Work

Websites with more information on grouping:

← Rennovating or Creating a Culinary Room
Fundraise with Cake Pops →